GEOPROSPECTORS - We are experts.

Another field of application for the TSM: Mexico

With CNH de México another partner in Latin America could be won for the Topsoil Mapper / SoilXplorer.

The Topsoil Mapper / SoilXplorer was presented at the Institut “Campo Agropecuario Experimental Gonzalo Río Arronte” to dealers and slected customers in the state of Querétaro at the end of September. First experiences were gained in handling the data, soil cell maps were generated quickly and the results were shared with the researchers of the institute. 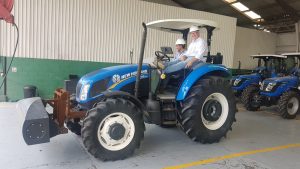 The demonstration of the Geoprospector’s Automatic Tillage Control on a Mexican, locally converted, cultivator demonstrated impressive the potential for increased efficiency.

Just over 20 million hectares of agricultural land in Mexico are managed or managed mainly by – mostly US – large farms. However, the production of corn, pumpkins, beans, tomatoes, but also different tropical products accounts for just over 3 % of GDP. Small and medium-sized companies often only produce for self-sufficiency. The dependence of Mexico on food imports is now almost 50 %.

However, a necessary radical change requires, among other things, the necessary modernization of the tools. Technology can help to understand soils and create the basis for a new agriculture.

Michael Kopecky / Internat. Sales: „With Geoprospector’s TSM, the modern farmer gets to know his soil more precisely and can thus increase the yield without further chemical treatment of the soil.“